Bone cyst of the proximal phalanx

The mare was referred for scintigraphy of the front distal limbs. The referring veterinarian’s complaint was chronic lameness located on the left front limb. The lameness occurred during the last months, and had intermittent character, ranging from moderate to severe (4/5 degrees). The mare was referred to respond positively to the diagnostic analgesia of the palmar digital nerves. The only radiographic finding detected was mineralization of the lateral cartilage (“sidebone”). Scintigraphy was aimed at confirming the foot and the ossified cartilage as the cause of lameness.

The mare was injected 7000 MBq Technetium 99 MDP and the bone phase examination was performed about three hours later.

The most significant finding was a spot of radionuclide accumulation on the proximal medial aspect of the proximal phalanx of the left limb, well visible on both dorsal and lateral scans. 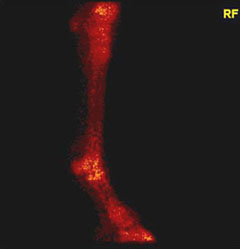 According with the referring veterinarian, the diagnostic blocks were repeated. The palmar digital nerve block was negative, as well as the intra-articular analgesia of the fetlock joint. The lameness was abolished after the block of the common digital nerves, at the base of the proximal sesamoid bones, and a moderate degree of contralateral lameness became apparent when the mare was trotted in a circle.

Radiographic examination revealed the presence of a large osseous cyst like lesion affecting the proximal medial aspect of the proximal phalanx, corresponding to the scintigraphic finding. 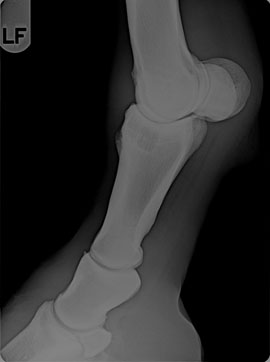 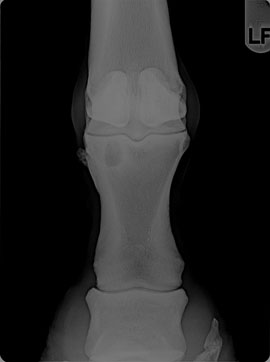 No joint communication was radiographically visible. The presence of a lateral sidebone was confirmed but was considered non significant.

Among the different surgical options, it was decided to treat the mare using the technique recently introduced by Santschi: a cortical screw inserted in a lag fashion through the cyst.

Surgery was fast and recovery uneventful. The mare was dismissed one week after surgery and given one month of stall rest followed by two months of paddock turn out.

The etiology of bone cysts in the horse has been long debated and the main hypotheses focused on traumatic or develepmental origin. Bone cysts represent a non rare feature in the horse and the most common location is the medial femoral condyle of the femur, followed by distal metacarpus/metatarsus, proximal radius, distal scapula and proximal and distal phalanx. They seem to be more common in areas of maximum load and frequently communicate with the adjacent joint space. Treatment includes rest, debridement, filling the cyst cavity with cancellous bone, bone marrow and intra-lesional injection of corticosteroids. A new surgical option has been recently proposed by Dr Elizabeth Santschi from Ohio State University and consists of insertion of a cortical screw in a lag fashion through the cyst. Dr Santschi’s preliminary studies showed encouraging results.