The mare was referred to the clinic for recurrent fever during the last month. The referring veterinarian suspected a pulmonary abscess because the mare occasionally showed cough associated with tachypnea.

The mare had been treated with sodium ceftiofur for 4 days followed by trimethoprim-sulphadiazine for about 20 days. To control the body temperature, flunixin meglumine or dexamethasone had been used when needed. In the presence of recurring clinical signs, the mare was referred for further investigation.

At admission, the mare presented with good bodily condition, fever was absent but she received some antipyretic treatment in the morning. The appetite was poor. Both heart and respiratory rates were normal (38 beats per minute and 16 breaths per minute respectively), but at auscultation abnormal sounds were detected in the lung area, especially in the cranial ventral quadrant. The heart was audible on both sides of the thorax.

Endoscopic examination was performed up to the carina and no abnormalities were detected. Thoracic ultrasound showed marked changes in the pulmonary pattern: on both sides the pattern appeared irregular with areas of hyperechogenicity and areas of hypoechogenicity mixed with normal pulmonary tissue. Radiographs were not performed due to the large size of the mare. 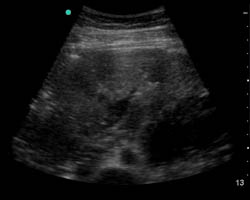 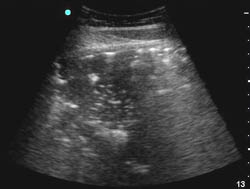 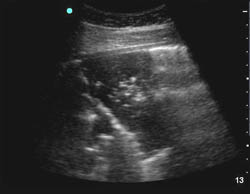 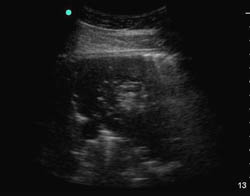 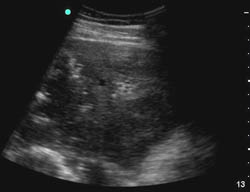 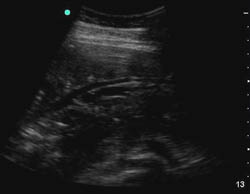 The following day a significant increase of WBC was recorded (15.600/mm3) and antibiotic treatment was started using gentamicin and ampicillin. To better understand the nature of the abnormal areas in the lungs, the mare was submitted to lung biopsy. Following the procedure, the mare started to cough and to expel abnormal tissue from the mouth. This tissue, together with the biopsy specimens, was sent to laboratory for histologic examination.

The mare was dismissed the following day and the owner was instructed to continue the therapy waiting for laboratory results.

Histology showed a pattern of chronic pneumonia characterized by fibrin and hemorrhage, with fibrosis and presence of foreign bodies of vegetal origin: the pattern was interpreted as inhalation pneumonia. The antibiotic therapy was continued for further 15 days and associated with oral administration of metronidazole.

When checked two weeks after the end of the treatment, the mare showed significant improvement, with absence of fever and cough, good appetite and good bodily condition.

One month after dismissal, thoracic ultrasonography was performed at the farm: the pulmonary pattern appeared diffusely normal, with the exception of a minimal thickening of a small pleural area on the right side. 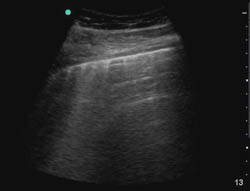 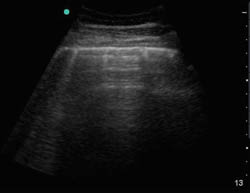 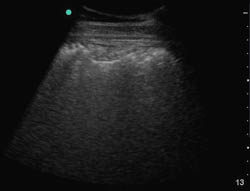 Two months after dismissal, the owner reported that the mare resumed regular exercise.