The horse was found in the morning in its paddock showing signs of abdominal pain unresponsive to analgesic therapy. The referring veterinarian made a rectal palpation and diagnosed a colon displacement. The horse was referred to the clinic.

At admission, the horse had a visible distention of the abdomen, showed pain by pawing and had the tendency to lie in lateral recumbency. Heart and respiratory rates were 92 beats per minute and 18 breaths per minute respectively, intestinal peristalsis was absent. Blood tests revealed PCV 55%, total plasma protein 7.6 g/dl, WBC 23.400/mm3, blood lactate 7.6 mmol/l, blood pH 7.3.

Gas distention of the ascending colon was palpated per rectum and 5 liters of reflux were removed by nasogastric intubation. Transabdominal ultrasonography didn’t add any specific information.

Due to the persistent pain unresponsive to medical treatment and other clinical findings, the horse was subjected to explorative laparotomy.

The horse was premedicated with xylazine (0.8 mg/kg) and general anesthesia was induced with 4% guaifenesin and ketamine (1.8 mg/kg) and maintained with isfluorane vaporized by oxygen and nitrous oxide. Nasogastric intubation was performed before induction.

After the abdominal cavity was approached, the caecum was found distended by gas and protruding from the incision. After the caecum was emptied, the asceding colon was exteriorized and a 270° volvulus identified and corrected.

After abundant peritoneal flushing using Ringer’s lactate solution, the abdominal wall was sutured in three layers. During surgery, a significant amount of gastric reflux was expelled through the stomach tube.

After recovery from anesthesia, the horse didn’t show any signs of abdominal pain. The day following surgery, signs of pain were absent, blood values were within the normal range, but the horse appeared depressed, reluctant to walk, with elevated heart rate (70 bpm) and descreased excursion of the thoracic wall during inspiration despite the absence of respiratory distress. Thirty-six hours after surgery, the clinical features were similar, but with a significant decrease of WBC (4.000/mm3), increase of the body temperature (40.7°C), and presence of nasal discharge.

Thoracic and transabdominal ultrasonography was performed. The abdominal cavity contents appeared normal, but on both sides of the thorax a significant amount of fluid was identified in the pleural cavity, associated with atelectasy of the most ventral pulmonary lobes. The diagnosis was pleuropneumonia. 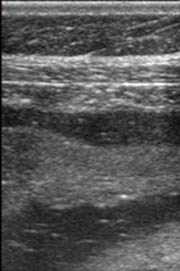 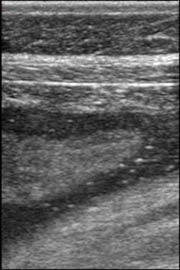 The treatment included antibiotics (ceftiofur 4.4 mg/kg, metronidazole 25 mg/kg BID per os) and low dosage (1.1 mg/kg) flunixin meglumine. The horse was submitted to bilateral thoracocentesis and 5.5 liters (Fig. 1, 2, 3, 4) of fluid from the right side and 3.7 liters from the left side (Fig. 5, 6, 7) were respectively drained. The procedure was repeated daily for 4 more days. In the following days, a significant decrease of the pleural fluid was associated with improvement of the clinical signs and for this reason no further thoracocentesis was performed. The same antibiotic treatment was continued for 12 days and was substituted by trimethoprim-sulfametazine association per os. Flunixin meglumine was suspended after 7 days, when thFe body temperature and other parameters become normal.

After ultrasonographic control of the thorax confirmed that only a minimal amount of fluid was present in the most ventral aspect of the pleural cavities, the horse was discharged 20 days after surgery. The bodily condition was poor, with significant weight loss, but the horse appeared alert with good appetite. It was suggested to continue the trimethoprim-sulfametazine therapy for 7 more days and to feed the horse with hay and supplements.

Two months after discharge, the owner reported that the horse was turned out in a paddock with improved bodily condition. No signs of respiratory problems were noticed and the surgical wound healed well.

In horses, pleuritis is relatively rare and commonly secondary to bacterial pneumonia with secondary involvement of the visceral and parietal pleura and transudation of fluid which is initially aseptic and later becomes contaminated (pleuropenumonia). It is generally associated with stress secondary to long-distance transport or strenuous exercise, especially when temperature and humidity are elevated in poorly ventilated housing, or to bacterial colonization following a previous viral disease. When therapy is started immediately, the prognosis is good.

In the case presented here, the horse was found painful in a hot summer morning and referred in the afternoon, possibly traveling under stress conditions due to colic and environmental high temperature and humidity. It was then submitted to a surgical procedure. We suppose that the concomitance of these events and conditions may have predisposed the horse to the later onset of pleuritis. The prompt diagnosis and therapy proved critical for the resolution of this severe complication, following the successful treatment of a large colon displacement.