Urachal cyst in a foal

The foal was born without complications after assisted delivery.

A few hours after birth, the owner noticed the presence of a swelling in the umbilical region with the size of half an orange. In the following days a warm and painful edema developed around the area. The farm veterinarian performed an ultrasonographic examination the day following birth. The suspect of umbilical hernia was ruled out because the umbilical remnants were normal, the abdominal wall appeared intact and fluid was the only content of the mass. A trauma in the umbilical region was suspected and the foal was put under antibiotic coverage. Three days after birth, the edema involved the full ventral abdomen including the penile sheath. The foal had stranguria, the body temperature raised to 40.2° C and ultrasonografically the bladder appeared distended.

The foal was referred to the clinic.

The foal was alert, with good appetite, painless but frequently attempting to urinate, but urine output was limited to a few drops. The ventral abdomen and the penile sheath were edematous. The hemispherical swelling was well visible in the umbilical region (Fig. 1). 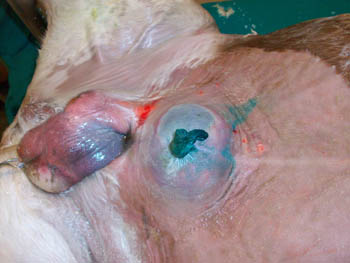 Ultrasonographic examination showed a distended bladder and a fluid filled structure was identified in correspondence of the umbilical swelling. By switching the probe, a communication between the latter cavity and the bladder became visible, the two cavities forming together and hourglass like structure (Fig. 2).

The diagnosis was urachal cyst with a possible communication with the subcutaneous tissues where the diffuse edema was present.

The foal was premedicated with xylazine (0,8 mg/kg) and general anesthesia was induced with guaifenesin (4%) and ketamine (1,8 mg/kg) and maintained with isofluorane vaporized by oxygen and nitrous oxide. With the foal in dorsal recumbency, the ventral abdominal wall was prepared for surgery after a urinary catheter was inserted in order to empty the bladder or at least reduce its contents.

The skin around the umbilicus appeared thin and discolored. After incision and careful dissection of the surrounding tissues, the cyst was identified filled with urine and spilling small amounts of urine in the subcutaneous tissue through a littler tear. The cyst was removed en bloc together with the umbilical remnants and, after ligature of the arteries and vein, a cystorraphy was performed.

The peritoneal cavity was flushed with sterile saline solution. The suture of the abdominal fascia was complicated by the fragility of the tissues, which suffered urine maceration and edema. In particular, a small portion of the abdominal muscles was nearly missing near the umbilicus on the right side. The suture was completed in three layers (fascia, subcutaneous and skin) and the foal recovered uneventfully.

A few hours after recovery, the foal was able to urinate normally showing good appetite and absence of pain.

The next morning a piece of omentum was noticed protruding from the abdominal suture. The foal was put under general anesthesia and partial failure of the suture was identified in the umbilical area. In order to close the abdomen more safely, the margins of the abdominal muscles were trimmed where they appeared more fragile and a new suture using larger bites was performed. A series of five tension sutures were added at about 10 cm on each side of the linea alba in order to relieve the tension on the midline suture. A stent was applied under the tension suture stitches and the abdomen was bandaged. The bandage was changed on a daily basis. Five days after the second surgery, the skin surrounding the suture sloughed leaving an uncovered muscular wall with its sutures. Despite that, there was no failure of the muscular suture, reinforced by the tension sutures, but a significant increase of the exudate. For this reason, the bandage was changed three times a day.

The foal was discharged 25 days after admission. At this time the abdominal muscular wall and sutures were covered by granulation tissue. The owner was instructed to stall rest the foal and change the bandage on a daily basis.

Two months after discharge, the referring veterinarian reported that the healing of the abdominal incision was complete, but on the right side of the umbilicus an 8 cm diameter non painful defect of the abdominal wall was palpable. It was suggested to wait and plan the possible hernia reduction when its margins were more sclerotic.

The next day, the foal was referred again to the clinic for severe colic. At admission, the foal was sweating with heart and respiratory rate of 90 beats per minute and 28 breaths per minute respectively. It was pawing and frequently tried to stay in dorsal recumbency. Transabdominal ultrasonography showed the presence of distended loops of small intestine.

The foal was prepared for surgery. In order to avoid the weak median abdominal line, a paramedian access, left to the linea alba, was elected. A large amount of distended loops of small intestine became immediately evident  (Fig. 3) and the cause of the distension was the presence of several adhesions with the abdominal wall in correspondence of the defect previously identified (Fig. 4). 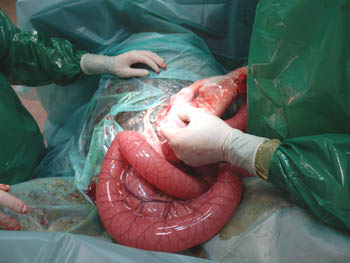 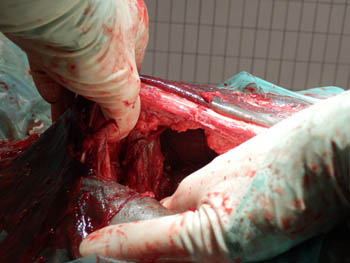 Due to the significant involvement of the small intestine, the foal was euthanized on human grounds.

Urachal cysts represent a very rare occurrence in foals and are mostly reported in calves. The cause is the presence of an enlarged urachus not patent but only communicating with the bladder. The wall of the cyst is thin and can easily tear both spontaneously or after manipulation. Urine infiltration in the subcutaneous tissues follows and a diffuse edema quickly develops, accompanied by reduced urine output and stranguria. The tissues infiltrated by urine tend to macerate and healing after surgical treatment may be impaired, like in the case described.

Adhesions represent one of the most common complications of abdominal surgery both in human and veterinary medicine. Manipulation of the serosa, especially in foals, is considered sufficiently traumatic to cause fibrin formation and subsequent adhesions. The area where the abdominal defect was identified possibly had insufficient peritoneum lining, exposing the bowel to the rough surface of abdominal muscles, with subsequent inflammatory reaction and adhesion formation. We hypothesized that the massive urine infiltration from the urachal cyst was the initial cause of muscular tissue weakness, which caused failure of the suture and later adhesion formation.