The horse showed signs of colic on the late evening after a show and was referred to the clinic by the local veterinarian.

Nasogastric intubation yelded 12 liters of gastric reflux with pH 7. Palpation per rectum evidenced the presence of gas in the large colon, with partial and possibly secondary impaction of the ascending colon. The presence of distended loops of small intestine was ruled out both by rectal palpation and trasabdominal ultrasonography.

The moderate but unrelenting pain associated with alteration of blood parameters suggested the need for explorative laparotomy.

After surgical preparation, laparotomy was performed via celiotomy. The ascending colon appeared impacted, with thickened and edematous wall. In order to facilitate manipulation, an enterotomy was performed at the pelvic flexure and the colon emptied. Part of the fecal material appeared particularly hard and needed energic manipulation on the transverse colon to be massaged and milked out. The colon was then sutured and repositioned. After a quick examination of the small intestine and lavage of the peritoneal cavity, the abdominal wall was sutured in three layers. The horse had received tetanus toxoid and antibiotics (gentamicin and procain penicillin), the latter continued for five days.

After surgery, among the feces removed from the colon, a 12 cm diameter enterolite was identified.

The horse was free of pain with the tendency of all blood parameters to improve, with the exception of leucopenia that was treated with the use of prednisolone.

The day next to the surgery, the horse was given water and fed with small amount of hay.

Two days after surgery, signs of pain relapsed, associated with lack of fecal output. At rectal examination the colon was still impacted and the horse received a treatment with mineral oil by stomach tube. Blood values were normal, but the horse appeared depressed with the tendency to lie in sternal recumbency.

The administration of mineral oil was not performer because, after introduction of the stomach tube, 8 liters of gastric reflux were removed. Despite treatment with neostigmine, intestinal motility remained poor, with lack of fecal output and increasing pain during the following two days. It was decided to proceed to relaparotomy.

The intra-abdominal situation was quite similar to the previous surgery. During enterotomy and emptying of the ascending colon, a second enterolite (Fig.1), slightly smaller than the previous one, was massaged out and it was thought to significantly obstruct the fecal passage in the transverse colon. 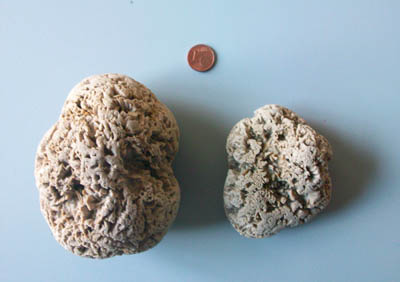 Following the second surgery, the horse recovered to a fully normal condition, including absence of pain and regular fecal output. Ii was discharged in good bodily condition after 25 days of hospitalization.

Five months after dismissal, the horse was readmitted to the clinic for the treatment on an incisional hernia on the abdominal wall. The horse fully recovered from the last surgery and resumed its previous level of athletic activity.

Enterolites of the large intestine represent a non unusual finding. The cause is the deposition of ammonium or magnesium phosphate salts around small foreign bodies. They can be asymptomatic for long time and become clinically significant when cause obstruction to the fecal transit, particularly at the level of the transverse colon