Displaced fracture of a metatarsal condyle in a yearling

At admission, the foal was submitted to a complete radiographic examination and the diagnosis of complete displaced fracture of the distal aspect of the medial condyle of the left hind metatarsus was confirmed (Figs. 1 and 2). 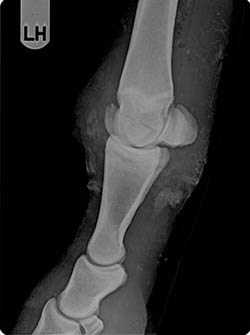 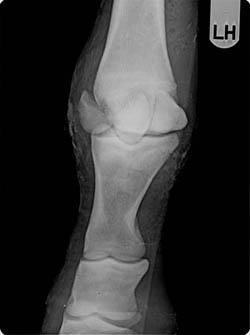 The yearling was administered tetanus toxoid and antibiotics (procain penicillin and gentamicin) and, after premedication with xylazine, general anesthesia was induced with guaifenesin and ketamine and maintained with isofluorane vaporized by oxygen and nitrous oxide.

The yearling was positioned in left lateral recumbency and the distal limb was prepared for surgery. After lavage and debridement of the wound, attention was paid not to traumatize the fractured portion of the condyle that appeared protruding from the wound (Fig. 3). 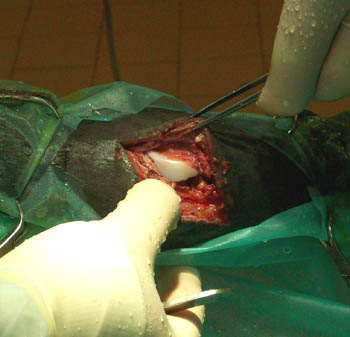 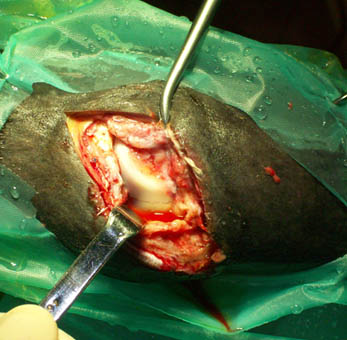 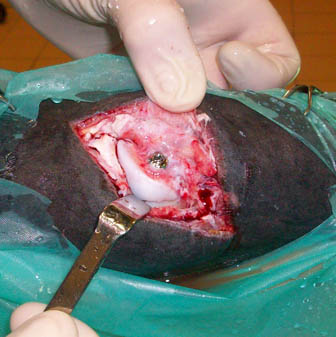 A cast was applied distally to the tarsus with the fetlock slightly flexed (Fig. 6). 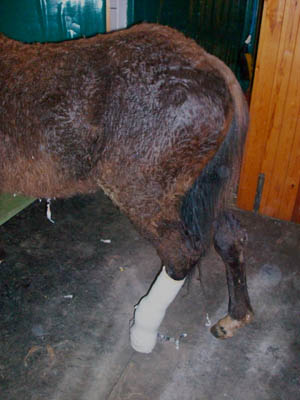 The main concerns were about the viability of the detached bone and the degree of contamination of the joint before referral and subsequent risks of infection.

The yearling appeared comfortable with the cast. A rise of the body temperature (40.2°) was recorded on the third day which persisted for five days and was treated with ketoprofen. Ten days after surgery, the cast was removed. The surgical wound was covered with abundant exudate and the cast was replaced with a rigid Robert-Jones bandage to allow frequent dressing (every second day). A radiographic control showed that the screw and the condyle were still in the correct position.

One month after surgery, the screw and the condyle were still in correct position, despite the presence of bone remodeling with a round area of osteolysis in correspondence of the fracture line. The yearling was discharged and given one more month of stall rest with the rigid bandage.

Information about the follow up were collected by telephone conversation with the referral vet who made regular radiographic controls. One year after surgery, the left hind fetlock appeared visibly swollen, but the horse had regular paddock exercise and was pasture sound.