Hyperlipemia in a pony

a week after an episode of diarrhea, the pony was referred to the clinic and appared depressed, with poor appetite and absence of feces.

Clinically, the pony was alert, not painful, the heart rate was 54 bm, respiratory rate 16 am, intestinal motility was absent, the mocous membranes were hyperemic with RCT >2, body temperature was normal (38.1°). The ventral aspect of the abdomen was edematous.

The pony was submitted to radiographic and ultrasonographic examination wiht evidence of diffuse paralitic ileus and abundant gas in the large colon. Gastric reflux was absent.

The diagnosis was hyperlipemia secondary to previous colitis.

The pony was treated with fluids (Ringer lactate solution and 5% glucose at 200 ml/h). It lacked any interest for drinking or hay.

Twice a day, heparin (4000 UI) was injected subcutaneously. Wisked apple and carrots were mixed with lactulose and branched aminoacids and given per os.

The pony started to drink but with lack of appetite for 4 days. The glycemia remained normal (range 98-127 mg/dl), PCV  ranged between 48 and 63% during the 10 days following admission, Tpp remained around 7 g/dl whereas WBC gradually decreased down to normal values 3 days after recovery. A progressive improvement involved also the hepatic and renal profiles and tryglicerides. Five days after admission, the pony showed interest for food, especially fresh grass. The heparin was discontinued and the pony was maintened under treatment with aminoacids, lactulose and fluids during the day. The appetite improved gradually and became normal on the 7nt day, when the pony started regular fecal output. 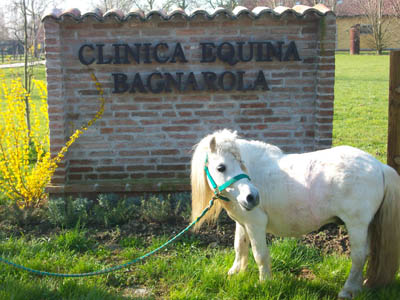 Hyperlipemia is usually a severe consequence of another previous systemic problem (colic, enterocolitis, obesity, laminitis), particularly in ponies and donkeys. The hyperlipemia is a syndrome characterized by negative energetic balance with secondary mobilization of peripheral adipose tissue. A massive release of fat acids follows, with infiltration of the liver and other organs like the kidneys and myocardium that are jeopardized in their functions. The milky appearence of the serum is caused by the accumulation of the triglycerides in the blood. Clinically, signs of the previous pathology are associated with anorexia (causing the negative energetic balance), depression, lethargy, icterus (hyperbilirubinemia), ventral edema (caused by hypoprotidemia).

The key points to reduce the triglycerides levels are the resolution of the primary problem, fluid therapy and restoration of the energetic balance.