The owner reported that some whitish malodorous plaques were noticed covering the penis when unsheathed. A sample from the tissue revealed the presence of Pseudomonas spp. and the horse was treated for seven days with antibiotics and local lavage. After some months, the mass involved the full glans penis with swelling of the sheath but no impediment to urination.

Despite the age, the horse presented in good bodily condition. A diffuse edema of the sheath was visible. To expose the penis, the horse was sedated with acepromazine and the cauliflower-like mass involving the glans became visible. A tumoral origin of the mass was suspected and, due to the dimensions and the possibility of diffusing and interfering with urination when further increased, penile amputation was proposed.

The horse was premedicated with xylazine and general anesthesia was induced with guaifenesin and ketamine and maintained with isofluorane vaporized by oxygen and nitrous oxide.

The horse was positioned in dorsal recumbency. After catheterization of the urethra, the glans of the penis was fixed with a clamp to the skin of the cranial abdomen. A rubber tourniquet was placed in the most proximal aspect of the penis (Fig.1).

A cranially based triangular incision, following the Williams’ technique, was performed on the ventral aspect of the penis about five centimeters caudally to the glans until the urethra was penetrated. The margin of the urethral wall was sutured to the penile skin and the portion of the penis cranial to the incision was excised. The result was a half cone-shaped opening of the urethra facing ventrally (Figure 2, from AS Turner and CW McIlwraith Techniques in Large Animal Surgery, Lea and Febiger 1989, and 3). At the end of the surgery, the urinary catheter was removed. 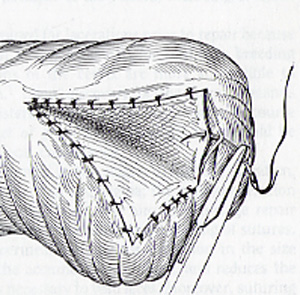 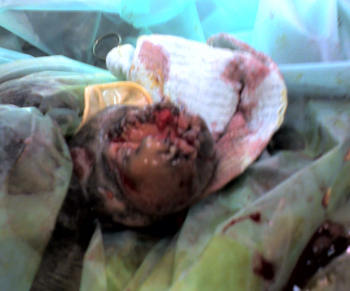 During surgery, the horse received antibiotics (procain penicillin and gentamicin) and tetanus toxoid.

The horse was discharged after a week with moderate swelling of the penis and sheath but normal urination.

Samples from the mass were submitted to histologic examination and the diagnosis was squamous cell carcinoma.

The owner was contacted and reported that the swelling gradually resolved and the horse was able to resume its activity with normal urination and good cosmetic result.

Squamous cell carcinomas have been reported as the most common tumour affecting the penis and prepuce of geldings of any age. A plaque-like inflammatory change – similar to the case reported here – is considered an early or “pre-cancerous” stage of development of the tumour.  More invasive tumours may result in an inability to withdraw the penis. Spread to local lymph nodes and other remote structures can occur.