Ruptured bladder in a foal

Ruptured bladder in a foal

The foal was referred for progressive abdominal distention, absence of urination and depression. The referral vet examined the foal ultrasonographically and made a suspect of uroperitoneum secondary to urinary bladder rupture.

The foal was admitted with signs of depression, in lateral recumbency and unable to stand, with weak suction reflex.

Clinical examination evidenced tachycardia (148 bpm), tachypnea (44 bpm), body temperature of 38.9° and pink mucous membranes, with capillary refill time of 2 sec. At auscultation, intestinal motility was excellent and respiratory sounds were normal. Joints were not distended or painful, but pressure sores were present on the lateral aspect of the left front fetlock, left hock and stifle. The abdomen was distended and a patent urachus was detected. Soft feces were present in the perineal region.

Abdominal ultrasonography showed the presence of hyperecogenic fluid in the peritoneal cavity, urinary bladder distention and patent urachus. Abdominal centesis was not performed.

The foal was prepared for exploratory laparotomy. Anesthesia was induced with diazepam and ketamine and maintained with isofluorane vaporized by oxygen and nistrous oxide. The electrolyte imbalance was treated using 5% glucose and 0.9% NaCl intravenous solutions. Preoperatively the foal was treated with sulphate amikacin, procain penicillin, antitetanic toxoid, ranitidine and, before the end of surgery, ketoprofen.

After entering the abdominal cavity, a large amount of yellowish fluid came out under pressure. Umbilical residuals were evaluated: umbilical vein appeared normal, urachus and umbilical arteries were thickened. A small rupture of the urinary bladder was identified on its dorsal aspect. Umbilical veins and arteries were clamped and cystorraphy was performed (Figure 1). The apex of the bladder and umbilical residuals were removed and cystorraphy was completed with double inverting suture. After flushing of the abdominal cavity, the abdominal wall was sutured in three layers. 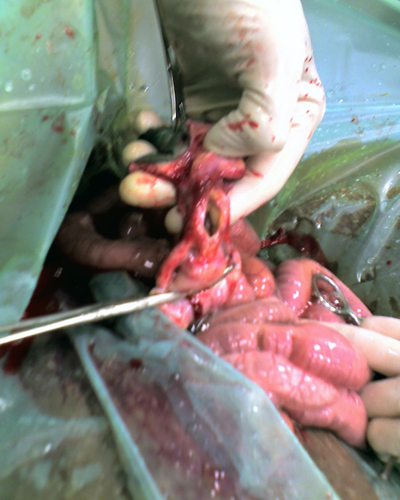 The recovery from anesthesia was quick and uneventful and the foal was returned to the stall with the mare.

In the immediate postoperative hours, the foal was able to raise and nurse. After each nursing, the foal urinated normally. Two hours after surgery, blood tests resumed normal values.

In the following days, the foal didn’t show pain, urination was normal and abdominal distention absent. The foal was kept under antibiotic therapy for 10 days, without the need of antinflammatory drugs.

The foal was dismissed in excellent condition two weeks after surgery.

Rupture of the urinary bladder and related structures is not rare in the neonate. Males have been reported as more frequently affected and in most of the cases the rupture affects the dorsal aspect of the bladder. We had cases of rupture of the ventral aspect of the bladder, frequently with a more caudal location toward the neck of the bladder. In these cases surgical treatment is more challenging. The urachus is a frequent site of leakage, unlike urethra and urethers, rarely reported in the literature.

The causes of urinary bladder rupture a still not clear and most likely the traumatic event is caused by the increased pressure on the bladder and other structures during parturition. More recently, septicemia has been proposed as a predisposing factor for rupture of urinary tract structures. Uroperitoneum is frequently associated with disturbances of urination, depression, tachycardia, tachypnea, abdominal distention, hyperkaliemia, hyponatremia, hypocloremia and a peritoneal/serum creatinine rate > 2:1.

Uroperitoneum is a medical condition because of the acid-base disturbances. Hyperkalemia and hyponatremia must be quickly corrected to lower the anesthetic risk linked to cardiac and pressure disturbances.

Broad spectrum antibiotics are necessary to prevent sepsis or to treat it when yet present.

The present case includes all classical features of uroperitoneum. The presence of patent urachus strengthens the assumption that the inciting cause could have been an ascending infection from umbilicus to urinary bladder.