The referral vet and the owner reported that the foal was dropping milk from the nostrils after sucking and that later during the growth the nasal discharge was characterized by the presence of food material and associated with cough. The water assumption was normal. The yearling was referred with a suspect of cleft palate.

The yearling appeared in good bodily condition, the growth was normal as well as the attitude. Nasal discharge was absent. No abnormalities were detected by auscultation, body temperature and blood tests were normal.

Endoscopic examination showed the presence of food material in the nasal airways (Fig. 1). In the pharynx a soft palate defect was present on the right side, possibly of congenital origin according to the history (Fig. 2). Food material was identified also in the trachea lumen up to the carina (Fig. 3). 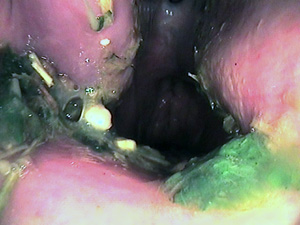 Due to the impossibility of any surgical treatment, the owner was informed about the possible onset of lower respiratory complications and the yearling was dismissed with poor prognosis for any athletic activity.