Intussusception in a foal

The foal was seen lying in sternal recumbency in the paddock with its mare. Later it became depressed and inappetent, and the owner reported signs of pain like rolling associated with soft stools. The transabdominal ultrasonography performed by the local veterinarian evidenced the presence of distended loops of small intestine and so the foal was referred to the clinic, after injecting flunixin meglumide to control pain during transportation.

Ad admission, the foal appeared depressed, indifferent to the mother, and with the tendency to lie in dorsal recumbency.

Nasogastric intubation resulted in 2,5 of gastric reflux with the presence of ascarids. Abdominal ultrasonography, according with referring veterinarian’s report, showed still and distended loops of small intestine with thickened wall.

It was decided to submit the foal to explorative laparotomy.

Following the routine protocol, the foal was premedicated and anaesthesia was induced and then maintained with isofluorane vaporized by oxygen and nitrous oxygen. At laparotomy, the small intestine did not appear particularly distended but numerous worms could be felt through the wall. In the most proximal tract of jejunum a 50 cm intussusception was found and the intestine proximal to it appeared distended and full of worms (Fig.1). According to the general conditions of the foal, the massive presence of parasites and potential complications following a significant resection, it was decided to submit the foal to euthanasia. 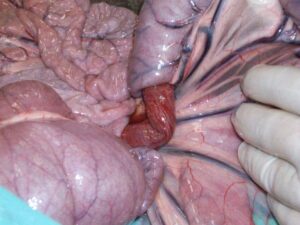 Intussusception is more common in young horses (3 months-1 year). The predisposing cause is altered intestinal peristalsis, secondary to enteritis, rapid diet changes, impaction and intestinal parasites (ascarids), foreign bodies or intra-luminal masses. The involved segment, if not very long, can allow a limited transit of material without leading to complete obstruction. When located in the jejunum, the intussusception generally involves an intestinal tract sufficiently long to cause complete obstruction.