Adhesions and stenosis of the descending colon

The horse showed signs of severe colic at the racetrack a few hours before racing. This was its first race after 4 months of resting and controlled exercise and training following a suspensory desmitis in a hind limb. The horse didn’t respond to treatment with flunixin meglumide and was referred to the clinic.

Transabdominal ultrasonography showed a free nephrosplenic space and small intestinal loops characterized by good motility and absence of distention. The duodenum was normally empty and no fluid was detected in the abdomen.

A displacement of the ascending colon was the most likely diagnosis, based on distention detected by rectal palpation. Due to lack of improvement after several hours from the onset of the colic, a decision was made for exploratory laparotomy.

When prepared for laparotomy a scar was identified on the mid abdominal line as a result of a previous surgery.

Abdominal exploration showed a normal small intestine and the ascending colon was in regular position, despite distention. The descending colon was impacted and, when exposed, its serosa was widely covered by organized fibrin (Fig.1) and diffuse adhesions (Fig.2). In several points adhesions caused significant stenosis of the lumen (Fig.3). 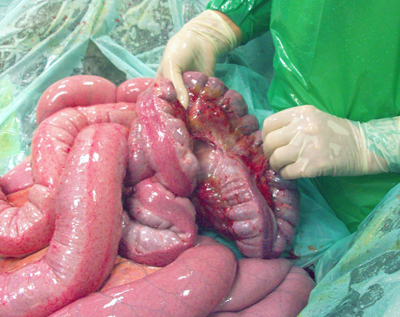 Where possible, adhesions were removed in the attempt to freed the loops and resolve the most significant strictures. After flushing of the descending colon and abdominal cavity, the abdominal wall was sutured in two layers (fascia and skin) and the horse was put in the recovery box.

After recovery from general anestesia, the horse showed mild signs of pain, mostly characterized by pawing, which resolved in two hours. Heart rate progressively decreased from 70 b/min to 36 b/min, intestinal peristalsis was always present, PCV decreased to 34% while TP and WBC values didn’t change. A small increasing of the body temperature (39.2° C) was treated with flunixin meglumide (1,1mg/kg) during the first two days postoperatively.

The horse was treated with mineral oil (2lt) by stomach tube for two days to soften the feaces in the stenotic small colon. The horse had immediate access to water and was fed with moderate amounts of fresh grass and hay 12 hours after surgery. The day after surgery the horse started normal defecation and no problems were detected during the following days.

The horse was dismissed 2 weeks after surgery.

In our experience, it is not infrequent the case of horses previously submitted to laparotomy and needing surgery for new episodes of colic. In these cases, the most common findings are adhesions, especially when the previous surgery involved the small intestine.

The present case appeared quite uncommon: adhesions only involved the descending colon in severe fashion but in absence of any sign of enterectomy. We suspected a previous surgery characterized by extensive manipulation of the descending colon. Looking back at the horse racing records, we ascertained that the horse had a regular racing career in USA before moving to Italy, with no significant periods of resting. No information was available about the period of life from birth to yearling, due to several changes of ownership. We speculated that the most likely condition needing laparotomy and manipulation of the descending colon was the surgical menagement of meconium impaction in the newborn foal. The foal’s intestine is particularly sensitive to manipulation, that invariably leads to adhesion formation and this was the most likely cause of the condition we found at surgery.