The horse was referred for scintigraphy because of a 4/5 degrees lameness on the right hind limb. A preliminary radiographic examination didn’t show any significant finding.

The horse was hardly able to stand and couldn’t bear weight on the right hind limb when walked. The limb didn’t show any area of swelling, heat or pain at palpation.

6500 MBq Technetium 99 MDP were injected intravenously and three hours later the horse was sedated with acepromazine and xylazine to be submitted to bone scan of hind limbs.

On the medial aspect of the distal tibia an intense spot of increased radiopharmaceutical uptake became visible, corresponding to the medial malleolus and extending proximally (Fig. 1, 2, 3). 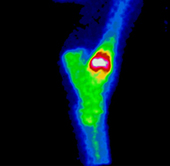 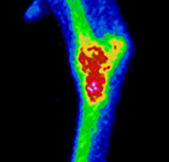 The scintigraphic pattern was referable to a stress fracture of the medial aspect of the distal tibia.

Radiographic examination showed the presence of a radiolucent line surrounded by radiodense bone between the medial malleolus and intermediate ridge of the distal tibia. The line was interpreted as a fissure surrounded by callus formation. The line was only visible on a dorsolateral-plantaromedial 15° oblique view (Fig. 4).

The horse was dismissed and three months of stall rest were recommended, followed by scintigraphic control.

Three months after the first examination, the horse was readmitted for scintigraphic and radiographic control. The area of the fracture was scintigraphically still visible but with significantly reduced extension and level of activity (Fig.5,6,7). 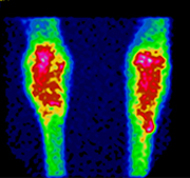 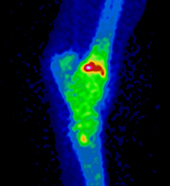 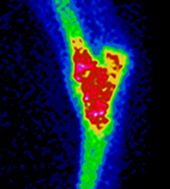 The horse was dismissed with a program of daily hand walking for one month, followed by one month of trot exercise before resuming regular work.