The horse was referred for chronic weight loss. The owner reported that the horse had been in training until a few months before and subsequently started to loose weight despite normal appetite. It had been under regular deworming program without any clinical improvement.

The horse showed severe weight loss (Fig.1), but was alert and not depressed. 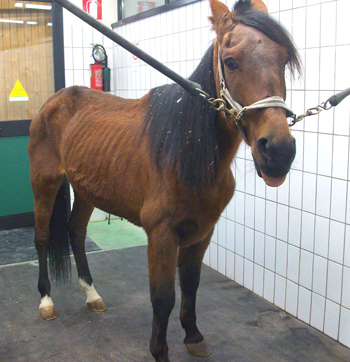 Tongue ptosis associated with atrophy of the masseter muscles was visible, particularly on the right side (Fig.2). 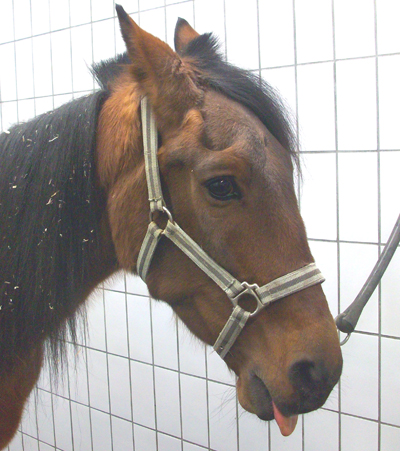 Edema was present on the ventral aspect of the abdomen (Fig.3). 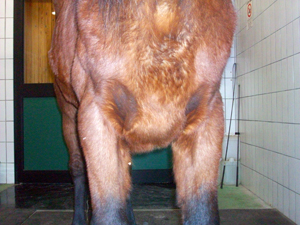 Body temperature, heart and respiratory rate were normal. The peristalsis was normal and auscultation of the chest didn’t reveal any abnormal sound. Mucosal membranes were pink, with capillary refill time < 2 seconds.

Urinary and fecal output was normal. The horse showed good appetite and normal swallowing, but mastication appeared difficult, with the tendency to turn the head toward the right side.

Blood tests showed thrombocytopenia and low total plasma protein (5 g/dl) with normal electrophoresis pattern. When blood was collected, some degree of agglutination of the sample was noticed and consequently it was submitted to direct Coombs test which resulted positive. Immune-mediated anemia was present, not detectable using routine hemocromocitometric test. Renal and hepatic enzymatic profiles were normal.

The mouth was examined with the help of a rigid oral endoscope and no abnormal findings were noticed. Endoscopy of the upper respiratory tract up to carina was negative.

A large mass was palpated per rectum in the dorsal left abdominal cavity. The mass was lobulated and consistently hard. The left kidney was not palpable and so a possible neoplasia originating from the kidney was suspected. Ultrasonographically, the mass appeared irregular when examined per rectum, with central areas of low ecogenicity surrounded by more ecogenic tissue (Fig.4). Transabdominal ultrasonography showed a normal left kidney (Fig.6) and the mass appeared well delineated just caudal to the last rib on the left side (Fig.5). The spleen was abnormal: its parenchyma was characterized by several round nodules of reduced ecogenicity (Fig.6, 7). The visible portion of large and small intestine had normal ecogenicity and no fluid was detected in the abdominal cavity. 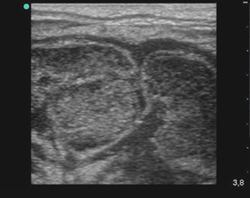 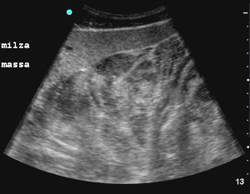 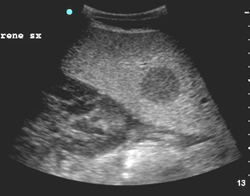 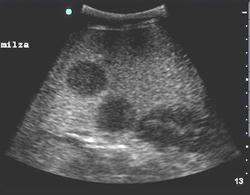 Gastroscopy and glucose tolerance test, initially planned, were not performed. The suspect diagnosis was neoplasia with presence of splenic metastases. Due to poor bodily condition and because of economic restraints and poor prognosis, the owner elected to have the horse subjected to euthanasia. 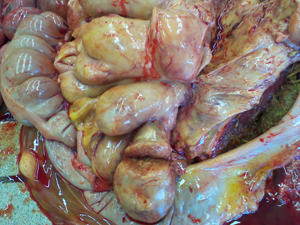 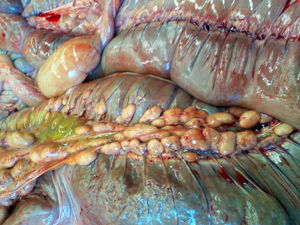 The spleen had normal size with diffuse presence of nodules (Fig.10). 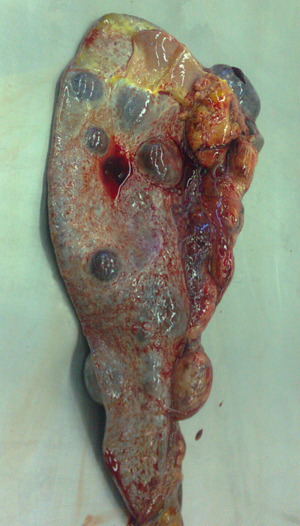 The liver was of normal size with presence of adhesions to the abdominal wall.

Fluid was found also in the thoracic cavity. Lungs and heart were normal. Dimensions of all lymph nodes were increased.

Samples from different lesions were submitted to histological examination.

The histological diagnosis was lymphocytic lymphoma diffuse to lymph nodes, spleen and liver.

Among limphoproliferative neoplastic diseases, lymphoma and lymphosarcoma are the most common in the horse.

Clinical signs usually manifest in the advanced stage of the disease and are severe but not pathognomonic. Weight loss, depression, anemia frequently immune-mediated (positive Coombs test), thrombocytopenia, edema caused by hypoproteinemia, accumulation of fluid in the large thoracic and abdominal cavities and lymphadenomegalia represent generic clinical signs easy to detect. More specific symptoms may appear depending by the involved apparatus.

The prognosis is frequently unfavorable. Chemotherapy may produce a temporary remission of the disease, but costs are high and long term results poor.