Fracture of the proximal metacarpus

The foal was referred for a fracture of the proximal metacarpus, just below the carpometacarpal joint (Fig.1), that occurred in the paddock. The fracture was not exposed and a full limb bandage was applied before transportation.

The foal was positioned in dorsal recumbency and the fracture was reduced with the help of a hoist attached to the distal limb. Two broad dynamic compression plates were used on the dorsal and lateral aspect of the proximal metacarpus and a full limb cast was applied (Fig.2). 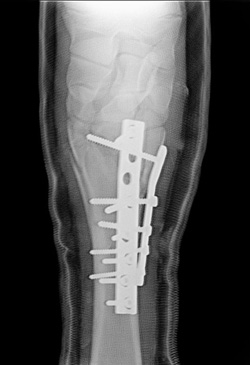 The recovery was assisted with ropes and was uneventful. The foal was treated with ceftiofur 4,4 mg/kg and ketoprofen 2,2 mg/kg. The cast was changed 2 times at 3 weeks interval, and finally a Robert-Jones bandage was applied.

The foal was discharged after 12 weeks.

Six months after surgery, the foal was readmitted and after radiographic control (Fig.3) the fracture healing was considered satisfactory, so the plates and screws were removed. A Robert-Jones bandage was applied. The postoperative program included 4 weeks of stall rest followed by paddock turn out. 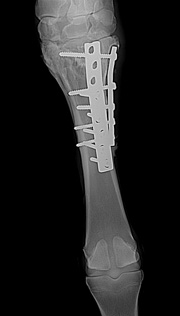 The horse started training as a 2 year old and was not lame, despite a low degree of flexural deformity of the carpus of the operated limb. For reasons not related to lameness but mostly to inability to get sufficient speed, possibly because some gait problems, the horse was retired.