Cronic eosinophilic enteritis of the jejunum

Chronic eosinophilic enteritis of the jejunum

The day before admission, the horse showed mild abdominal pain and was treated with flunixin meglumine and buscopan. The initial diagnosis was ascending colon impaction and the horse was given 2 liters mineral oil by stomach tube. The episode was connected with previous intermittent colic’s resolved with medical management. Because of worsening of the condition, the horse was referred to the clinic.

Several loops of small intestine were palpable per rectum. Nasogastric intubation produced 17 liters of reflux (with the presence of oil) with pH 7.

Following a diagnosis of small intestinal obstruction of unknown origin, the horse was submitted to exploratory laparotomy.

Abdominal exploration evidenced distention of the proximal small intestine and a segment located at mid-jejunum where two areas of the intestinal wall appeared thickened (Figure 1). Luminal obstruction was suspected, because the intestinal contents were accumulated proximally to the thickened areas, whereas the distal jejunum was empty. The two segments measured 10 cm each and were separated by one meter of normal jejunum. A double intestinal resection of the affected segments was performed with end-to-end anastomosis. The abdominal wall was sutured in three layers (peritoneum, fascia, skin). The recovery from anesthesia was quick and uneventful. The horse was treated with procain penicillin (22.000 UI/kg) and gentamicin (6.6 mg/kg) for 5 days. The treatment also included flunixin meglumine (0.5 mg/kg BID) and acepromazine (5 mg TID) for 2 days. A few hours after surgery, the horse appeared free of pain and all clinical parameters returned quickly to normal values. A moderate drop of leucocytes was successfully treated the third day after surgery. 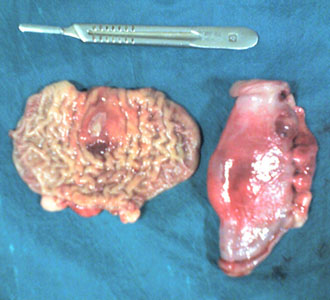 The two resected segments of small intestine were submitted to istologic exam. Intestinal villi appeared flattened with focal areas of ulceration (Figure 2). A severe infiltration of eosinophilic granulocytes, macrophages and lymphocytes was diffused in all intestinal layers up to the serosa (Figure 3). The pattern was defined as chronic ulcerative eosinophilic enteritis. 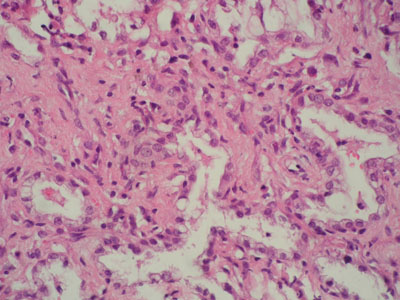 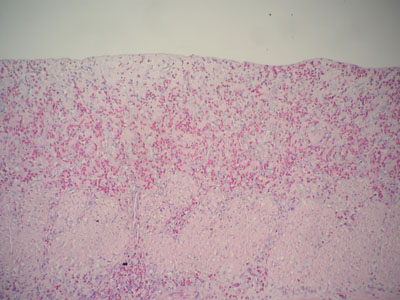 The horse was dismissed 10 days after surgery. Six months after dismissal, the horse was in good bodily condition and returned to full athletic activity.