The filly was found in the morning with moderate but persistent pain, lack of appetite and absence of feces. Heart rate was 70 b/min, respiratory rate 26/min., the peristalsis was normal and no abnormalities were found on rectal examination by the local vet. The filly was treated with Flunixin meglumide and mineral oil (2 l.) by stomach tube. The filly was still colicky and was referred to the clinic.

At admission, the filly was depressed with mild colic (intermittent pawing and looking at the flank). The rectal temperature was 38.7°, heart rate 74/min, respiratory rate 12/min, normal peristalsis on abdominal auscultation, normal mucous membranes. The PCV was moderately increate (48%), TPP were 7.2 g/dl and WBC 4200/ml. Blood gas analysis was normal. Nasogastric intubation yelded no reflux. On rectal examination, an hard, painful mass was palpated on the descending colon. Transabdominal ultrasonography showed no abnormalities.
Two hours later, the pain increased with worsening of all parameters (PCV 54%, TPP 7.6 g/dl., WBC 3300/ml) and this led to the decision of performing exploratory laparotomy. 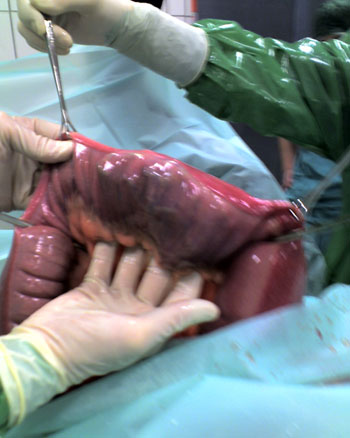 On abdominal exploration, a hard, irregular mass was found occluding the descending colon. An enterotomy was performed directly over the mass on antimesenteric taenia and the mass was easily removed. The colon was sutured and, after lavage of peritoneal cavity, the surgical wound was sutured on three layers (peritoneum, fascia and skin). 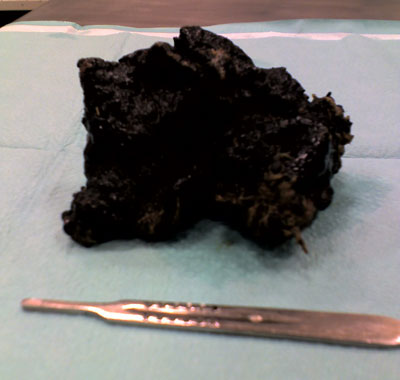 The mass was cleaned and examined. The feces were sticked around a foreign body which was identified as a plastic rope. The origin of this material was not ascertained.