Fracture of the proximal phalanx

Fracture of the proximal phalanx

The horse was found with acute non weight bearing lameness of the left hind limb after light training. The horse was on a regular training schedule and the trainer notice a mild left hind lameness during the last month.

The referral vet made a radiographic examination of the distal limb and a multiple fracture of the first phalanx was diagnosed. A cast was applied to the limb before referral to the clinic. 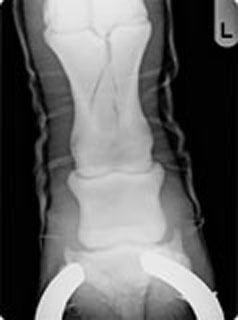 Further radiographic views allowed to properly visualize the fracture, which appeared more complex. The main fracture line started proximally on the sagittal plane and then deviated toward the medial cortical; a second fracture line descended from proximal to distal in a spiral fashion toward the proximal interphalangeal joint. The horse was operated with internal fixation using four 4.5 cortical screws in lag fashion, each crossing the fracture lines on a perpendicular plane. Intraoperative radiographic control confirmed a satisfactory reduction of the fracture.

The horse recovered from anesthesia with the operated limb in a cast that was maintained for 10 days, when the horse was discharged from the clinic. The cast was replaced by a stiff bandage for 2 weeks and then by a regular bandage for 2 months.

Two months after surgery a radiographic control showed complete healing of the fracture, with new bone formation on the medial aspect of the first phalanx possibly caused by a screw protruding for a few millimeters. The horse started walking exercise and after three weeks was turned on a paddock for one month. 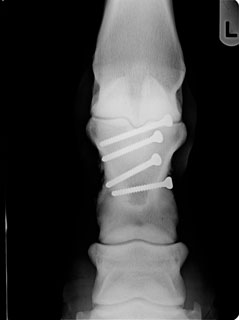 The horse started jogging exercise 4 months after surgery and no lameness or any abnormal signs were reported by the trainer. The horse raced 8 months after surgery in the same class with good results (40 starts, 5 wins and 22 places) and improved its life time record from 1.19.3 to 1.14.0.

Proximal phalanx fractures are considered fatigue fractures and are caused by the accumulation of microtrauma caused by training and racing. In the present case, the light lameness observed by the trainer one month before was referable to the progressive onset of the fracture, possibly detected by early radiographic or scintigraphic examination.