The horse was referred to the clinic with a diagnosis of sinusitis characterized by monolateral serous discharge from the left nostril.

The owner reported that the horse had a previous surgery a few years before with trephination of the right caudal maxillary sinus to treat a sinusitis. The same technique was used a few months before referral on the left caudal maxillary sinus affected by sinusitis. The owner reported that the first surgery solved the problem on the right side, unlike the surgery on the left side where the nasal discharge re-appeared with a tendency to increase.

The horse presented with odorless mucous discharge from the left nostril. No facial deformity was evident and the oral cavity appeared normal.

Endoscopy revealed the presence of mucous discharge in the nasal cavity. No abnormalities were found in the pharynx, larynx, guttural pouches and trachea.

Radiographic examination (lateral and two oblique views from proximal to distal) ruled out abnormalities like the presence of fluid lines but a diffuse opacity was visible in the area of the maxillary sinuses (Fig. 1). The diagnosis was chronic sinusitis of the left caudal maxillary sinus. 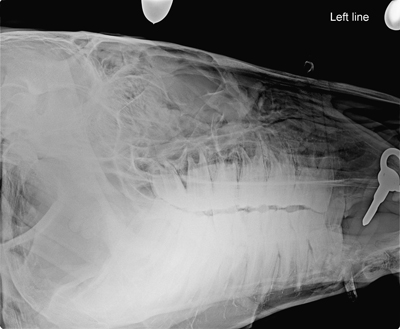 The horse was treated surgically using a flap technique. After debridement, the left caudal maxillary sinus was lavaged and a Foley catheter was left in situ for daily flushing for 10 days.

The horse was discharged after 26 days in good bodily condition and absence of any nasal discharge.

Three months after the first surgery, the horse was re-admitted to the clinic for recurrence of clinical signs. The nasal discharge was now mucopurulent and malodorous. Palpation evidenced lymphoadenomegalia of the left submandibular lymph node. The horse was treated using the same approach than in the first surgery. A sample of the material from the sinus cavity was submitted to culture and antibiogram. Results showed the presence of Streptococcus equi zooepidemicus sensitive to ampicillin. The horse was treated with daily flushing of the sinus associated with parenteral sodium ampicillin and was discharged after 20 days in good condition and absence of nasal discharge.

Two and a half months after the second surgery, the horse was re-admitted to the clinic. A visible deformation of the frontal and nasal bones was visible, associated with left exophtalmus, conjuntivitis and presence of abundant purulent nasal discharge from the left nostril (Fig. 2, 3). 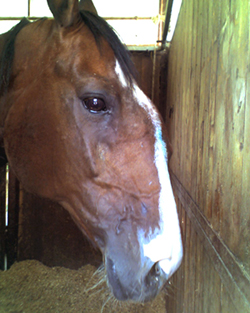 Lymphoadenomegalia of the left submandibular lymph node was still present. The previous surgical site was characterized by the presence of exuberant granulation tissue. Several small abscesses were present in the region between the left eye and the surgical wound. The horse was still in good bodily condition with normal appetite.

Radiographic examination revealed increased radioopacity of the maxillary sinus and deformity with bulging of the frontal and nasal bones (Fig. 4, 5). 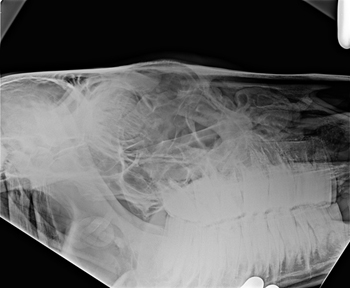 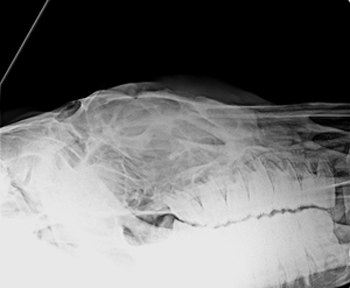 With the horse under sedation, a sample of material from the left caudal maxillary sinus was taken using a Ferris Smith rongeur through the opening of the sinus. A needle aspirate was performed on the affected lymph node.

Laboratory results evidenced the presence of a squamous cell carcinoma.

According to the owner’s request, the horse was submitted to euthanasia.

Squamous cell carcinoma of the paranasal sinuses is rare, but represents the most common tumor in this area. It is typically found in aged horses.

At the beginning, clinical signs are frequently non specific, like nasal discharge and epiphora. Nasal discharge  is secondary to alteration in the mucociliar clearance caused by the tumoral mass. Obstruction of the sinusal drain is followed by infection with mucopurulent discharge that rarely becomes hemorrhagic. Another non specific sign is submandibular lymphoadenopathy as a consequence of infection or metastasis. The same findings may be secondary to inflammatory and/or infectious processes primarily localized in the sinuses or secondary to teeth abnormalities. In advanced stages, when frontal and nasal bone deformity occurs, paranasal sinus cyst represents a differential diagnosis.

Due to the malignant and aggressive nature of this tumor, the prognosis is unfavorable. Chemotherapy or radiotherapy are used in the treatment of nasal tumors of the dog and cat, but in the horse their cost is prohibitive.