Salter Harris fracture in a foal

The foal was found in the morning lying down and unable to rise. When forced to standing, a severe lameness was noticed on the left hind limb. A small wound and swelling were visible on the distal lateral aspect of the metatarsus. It was assumed that the mare stepped on the foal’s limb and caused the injury. A first set of radiographs was made in the stable and the diagnosis was a Type II Salter Harris fracture of the distal metatarsus. After application of a rigid bandage, the foal was referred to the clinic.

The foal was in good bodily condition, nursing and blood parameters were normal. A type II Salter Harris fracture of the distal metatarsus was confirmed with radiographs (Fig. 1), so the foal underwent surgical management. 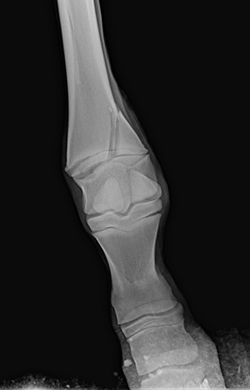 After premedication with xylazine (0.8 mg/kg), general anesthesia was induced with guaifenesin and ketamine (1.8 mg(kg) and maintained with isofluorane vaporized by oxygen and nitrous oxide. The foal was administered tetanus toxoid and antibiotics (amikacin 6.6 mg/kg and procain penicillin 22.000 UI/kg), the latter continued on a daily basis for 7 days.

With the foal on right lateral recumbency, the left distal limb was prepared for surgery. Reduction of the fracture was satisfactorily achieved using two 4.5 cortical screws (Fig. 2, 3) in a lag fashion avoiding the use of a plate bridging the growth plate with secondary angular deviation of the distal limb. 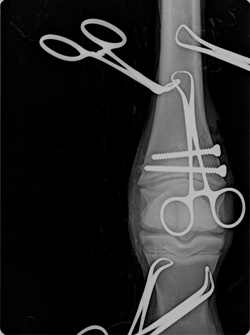 At the end of the surgery, the limb distal to the hock was immobilized in a cast. The recovery was fast and uneventful.

The foal was hospitalized for one month. Two weeks after surgery, the cast was removed and replaced. Radiographic control confirmed the correct positioning of the implants (Fig. 4). 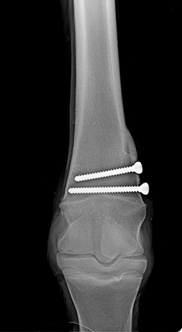 One month after dismissal, the foal was re-admitted to the clinic: after radiographic control, the cast was removed and replaced with a rigid bandage. When the latter was removed, the foal showed laxity of the left distal limb that alerted the owner. The foal was visited in the farm and any problem related to the surgery was ruled out (Fig. 5, 6). The laxity was attributed to the long lasting immobilization of the limb, so daily walking with the mare was suggested for 10 days followed by turn out in a small paddock. 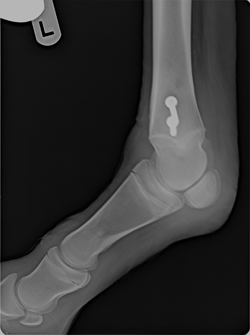 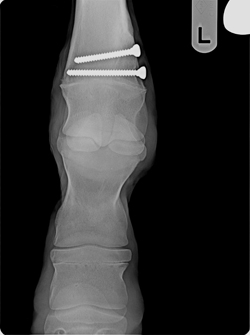 Three months after surgery, radiographic control showed complete healing of the fracture. The foal was re-admitted to the clinic and implants were removed.

At yearling age, the operated limb had excellent cosmetic appearance. The filly was sound and the radiographic control before starting the training showed a normal appearance of the distal metatarsus and fetlock.