The mare was in training and started to show colic signs the night before referral. The initial treatment included flunixin meglumine and mineral oil by stomach tube. The next morning, in absence of improvement, the mare was referred to the clinic.

At admission, the mare was sweating with signs of abdominal pain. Heart rate was 58 b/min, respiratory rate 18 b/min, the intestinal motility was reduced. PCV was 38%, total plasma protein 7.4g/dl, WBC 6400/mm3.  Four liters of gastric reflux with pH 6 were removed by stomach tube. A diffuse impaction of the descending colon was palpated rectally, invading the full pelvic cavity.

The mare was initially monitored and pain was controlled with Metamizolo (10 g), but pain and blood parameters showed a negative trend, so it was decided to proceed with explorative laparotomy.

The mare was premedicated with xylazine (0,8 mg/kg) and general anesthesia was induced with guaifenesin (solution 4%) and ketamine (1,8 mg/kg) and maintained with isofluorane vaporized with oxygen and nitrous oxide.

At laparotomy, the diagnosis of impaction of the descending colon was confirmed and successfully treated with proximal-to-distal massage. Recovery was uneventful and the mare quickly resumed normal clinical parameters, with absence of pain. The mare was dismissed after 8 days.

One week after dismissal, the mare became inappetent, frequently recumbent with signs of moderate abdominal pain, so it was referred to the clinic. By rectal palpation, the findings were again indicative of impaction of the descending colon, but blood parameters were normal. The mare was treated with mineral oil for 3 days, but the condition was worsening, with total absence of feces. The fourth day, the mare was submitted to re-laparotomy. The descending colon appeared impacted, but the cause was identified with a heavy peduncolated mass strangulating the small colon. The mass was partially exteriorized and was identified as the right ovary of increased size (diameter 25 cm) and weight (Fig. 1, 2, 3). A right ovariectomy was performed. Recovery was uneventful and the mare became immediately free of pain, resuming normal blood values, appetite and intestinal function. Feces were initially soft for the presence of mineral oil, then became normal. 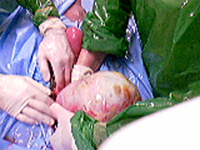 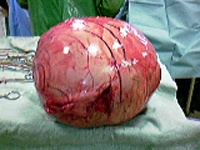 The mare was treated with perioperative antibiotics (Procain penicillin 22000 UI/kg and gentamicin 6,6 mg/kg) for 10 days. The immediate postoperative period was normal, with a single episode of moderate fever (39,4°C). The mare was discharged after 20 days of hospitalization.

Macroscopically, the sectioned ovary appeared as a typical case of granulosa cell tumour, despite the absence of any sign of abnormal behavior reported by the owner. Four months after the second laparotomy and ovariectomy, no colic episodes were reported. A significant incisional hernia became apparent 2 months after discharge, but the owner declined any further treatment.

This was an unusual case of complications caused by the presence of a large ovary affected by granulosa cell tumour. No signs of abdominal pain or abnormal behaviour were reported by the owner. It is possible that the loss of ligamentous support secondary to the increased weight of the ovary was the cause of its dislocation. The presence of an abnormal ovary was missed during both rectal examinations, focused on the evaluation of intestinal structures. A complete and systematic evaluation of each structure accessible per rectum is considered necessary to rule out any rare condition affecting intra-abdominal organs.